Snowblowers are generally known as effective tools for the removal of heavy snow and for clearing your environment. While these weather tools always come in handy during winter, it is quite important to know the importance and limitations of your snowblower. Also, you should be able to answer questions like “can my snowblower remove ice?” without hesitation. Most homeowners or operators who have ever used a snowblower for a certain period probably know the answer to this question already. However, for beginners and people that are relatively new to this, it is very important to know these things. Usually, most snowblowers will easily break up chunks of ice due to their augurs which is responsible for chewing through the snow and releasing them to pass through the exhaust shoot.

Can a Snowblower Remove Ice?

Yes, a snowblower can also remove ice, but how well it goes depends on the thickness of the ice and the size and weight of the snowblower. The snowblower needs to break the ice into chunks that can be pickup by the augurs. A bigger, heavier and more powerfull snowblower will be able to break thicker ice. Generally, two or three stage gas snow blowers are better suited.

Generally speaking, one of the major causes of injury and other risk factors we encounter during winter, is undoubtedly ice. Ice, being slippery and unnoticeable in winter, can even be sometimes fatal, especially if care is not taken. This is why ice should be broken into harmless pieces and gotten rid of before it causes an accident. That being said, the size of the ice chuck you plan of breaking as well as how solidly frozen it is should also be put into consideration.

This means that it also depends on how powerful your snowblower is, as some are designed to be more powerful than the others. Hence, a larger and more powerful snowblower will most likely not have any issue removing large chunks of ice as long as they can be relatively manageable and easily navigated. On the other hand, a small snowblower that is not very powerful might have a lot of difficulties when it comes to breaking up more than a few chunks of ice. Do you want to know more about how a snowblower can break ice? Keep following closely and you will get your answer.

Ice in winter generally forms due to one of the following:

Getting rid of the snow formed may be a little difficult or may even be nearly impossible, depending on the kind of ice formed and the type of snowblower machine you have.

Picking the Right Snowblower for the Task

Some certain features and factors should be put into consideration when deciding on the type of snowblower you want to buy. Many of these factors have a lot to do with the particular weather of the area you reside in. For instance, if you live in an area that gets a great amount of snowfall and also receives a lot of ice, then it is probably a great idea to purchase a larger and more powerful snowblower. Most times, people that purchase smaller models of snowblowers instead of the large ones do so because they live in areas or regions where it does not snow that often. So it may be quite easy for them to get by with one that is smaller and with less power. However, if you are someone that stays in an area that gets a great deal of snowfall, then you will need a snowblower that can withstand all the elements.

How Do Snowblowers Work On Ice?

It may not seem important to some people, but understanding the basic mechanism of snowblowers will go a long way. Generally, snowblowers are designed to come with augers that are responsible for clearing snow and other unwanted items on the ground beneath it. These augers come in a pair in two-stage snowblowers, and paddles in single-stage ones. Typically, the two-stage snowblowers are far more efficient in breaking and clearing ice than their single-stage counterparts. This is because of their engine strength and the fact that they are heavy-duty machines.

When you select the right kind of snowblower for your job, not only will it improve efficiency, it will also save you a lot of time. And since single-stage snowblowers are more or less motorized brooms, we will be skipping over them and focusing more on the heavy-duty machines: the two-stage and three-stage snowblowers. That being said, there are two more subdivisions of snowblowers:

Electric snowblowers can pick up ice up to 6 inches, but if you want to get rid of ice of more than 6 inches, then you will have to use a single, two-stage or, three-stage gas-powered snowblower.

How to Remove Ice with a Snowblower

If there are chunks of ice within the snow, then you are in luck. This situation is one of the easiest that you can encounter while snowblowing as all you have to do is run your snowblower (two-stage or three-staged gas-powered snowblower) over the area, and allow the augers to break the ice chunks into smaller pieces. Another situation you may encounter is finding an ice ridge somewhere along your driveway. Now, depending on how big or tall the ice ridge is, your snowblower may be able to break it up as long as it is not more than 6 inches. However, if you are still having difficulties, you can use a shovel to break the ice ridge into several chunks and then run your snowblower over it to break it up completely.

Now the third and most difficult scenario is dealing with a sheet of ice. An instance is when you drive your car over an uncovered driveway several times causing the ice to solidify together In this case, you are probably not going to be able to get rid of the ice. First, you have to consider the layers of ice formed over the ground and the capacity of your snowblower. Normally, your snowblower is designed to run over the ground, pick up loose material, chug it and blow it away. But if the snow has been packed down and has turned into ice, then undoubtedly, it will be very hard for your snowblower to distinguish between solid ice and solid ground. A two or three-stage gas-powered snowblower can break huge chunks of ice with ease, but it all depends on the size and length of the ice sheet. To make things easier, you can whack the ridge of ice into larger chunks of ice and run it over with your snowblower to break it up.

Finally, your snowblower is supposed to help make your life easier, and this can only be possible if your tool is in great condition. So make sure you handle it with care to get the best results. You may also have to take a little more time than usual when you are clearing ice. 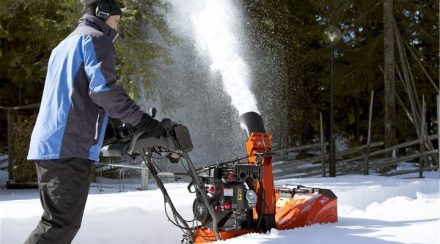 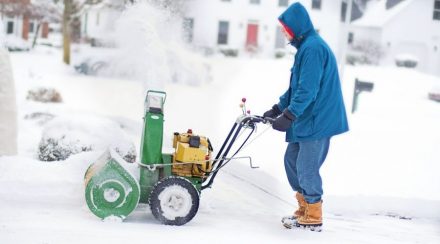 How much do snowblowers weigh?
Categories: Snow Blower 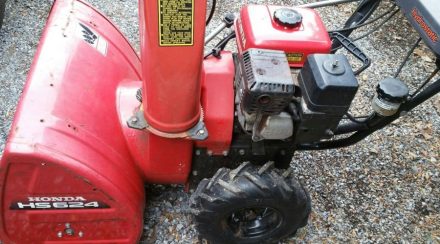 How to Maintain Your Snowblower: Use This Step-By-Step Approach
Categories: Snow Blower