On a beautiful sunny day, you plan to do some trimming or give your lawn a thorough cut. All goes wrong when you suddenly discover that your lawnmower is blowing smoke. Even so, stay calm. Typically, it is not so severe, and the issue can be easily fixed by some simple techniques mentioned in this article.

Blowing smoke is usually not a severe malfunction, but it can turn into something worse if it is not handled carefully. Do not panic! We have prepared a troubleshoot guide to progress gradually and carefully from one stage to the next. The primary cause for such havoc can be the leakage of oil into the exhaust, apart from other common issues.

How to stop a lawnmower from smoking:

The probable cause is the oil spillage from the oil tank when you are changing the oil or filling it beyond the suggested level.  Additionally, turning/tilting the engine upside down during maintenance, storage, or any other reason can also contribute to this issue. When you are moving uphill or downhill, it can cause oil spillage. Other plausible causes include:

What matters the most is the color of smoke. It can be white, blue, or black. These colors indicate peace, depth & stability, power, and authority in an ideal world, respectively. However, these colored emissions have an entirely new meaning for lawnmower blowing smoke, and they could indicate troubling machinery. If you are not familiar with the mechanical components and do not precisely know where to troubleshoot from, this article can give you an insight on how to address the smoky lawnmower without consulting a professional.

White and blue smoke indicates that the engine is burning oil due to some reason. Remain peaceful if your mower is smoking because it is not due to any complicated issue. Lawnmowers usually produce white or blue smoke when oil is overfilled, and it seeps into the crankcase. Damaged piston rings and low-quality oil are also reasons for the smoke.

Follow the given detailed steps to get rid of white and black smoke:

Filling engine oil beyond the limit or using unsuitable engine oil grade can be a reason for both clouds of smoke. Follow the steps below to check the oil level.

Make sure that the tilting angle of the engine is less than 15 degrees. Mowing uphill can cause the oil to spill into the combustion chamber, so in this case, make sure that the spark plug is facing upward to avoid leaking of oil.

Examine the crankcase for leakages and seal them as soon as possible.

Always use the good quality oil and also inspect which grade oil is suiting your lawnmower. Never overfill the oil as it causes many issues.

Check if the rings, cylinders, and head gaskets are damaged. If so, replace them because they can’t be repaired.

An Important Tip: When you start a new mower, it gives white smoke. There is no need to worry because it is due to residue left behind in the mower by the manufacturer. In this case, just let the engine run until all the remainder is burned.

Mostly thin white smoke disappears on its own by letting the engine run- as it is not a significant matter of concern. However, a much thicker white smoke can be a signal towards the big issue. For example, this issue may be because the oil made its way into the combustion chamber and then creates difficulty for the engine to work correctly. But on the positive side, such type of issues can be solved quickly. Oil is used to lubricate parts around the engine, but if you add more oil than recommended, it can seep into other parts where it shouldn’t be. When the mower is turned on engine starts making blue or white smoke by burning that seeped oil.  So, it is crucial to prevent oil spillage. Keep your spark plug in an upward position to avoid this issue even when moving uphill.

Black smoke indicates that there is some issue in the carburetor and fuel system. It shows the burning of more fuel than air, i.e., the fuel mixture contains more gasoline than the required amount. It may be due to a faulty carburetor or debris stuck in the air filter. Black smoke in the lawnmower is due to debris in the air filter, causing clogging or an un-cleaned carburetor.

If the lawnmower continues to produce black smoke after following the above steps, some complicated issues should be addressed to professionals.

If after following the above-explained steps, it shows that oil reaches the combustion chamber through some worn or damaged seals, and it can make the engine dead, which is a severe issue. This issue can be due to:

The piston ring avoids the movement of oil between cylinder and piston wall, and if it’s broken or damaged, it would indeed cause smoke. Usually, three pistons are used in a lawnmower engine.

If any of the three rings are damaged or worn, it results in oil spillage from the cylinder to the combustion chamber, where it burns and produces white smoke. Damaged or faulty air and fuel filters would allow the dust and debris into piston rings, damaging them.

1. Why oil comes out of the lawnmower exhaust?

When the mower is started, fuel with oxygen moves into the piston through the valves, and exhaust gases are forced out. But if any one of the components in the piston, cylinder, exhaust pipe, and exhaust manifold is damaged, it would cause the oil (used for lubrication around the engine) to come out of the exhaust. Some common causes of oil coming out of the lawnmower exhaust are:

2. When the lawnmower blows blue smoke?

3. How to drain oil from lawnmower?

Place the mower on a level horizontal surface and locate the drainpipe at the bottom of the lawnmower’s engine. Take any container in which you want to collect the drained oil and place it on the ground near the mower. Use an adjustable wrench to remove the drain’s cover and let the old oil drain in the container placed at the ground. In some cases, the drainpipe has a valve, and we are supposed to turn the valve cap on for draining purposes. After draining the oil, fix the cover or turn the valve cap to stop the process.

Engines of different mowers are designed differently, so you must consult the owner’s manual before proceeding and applying any of the above procedures and maintenance hacks. Safety comes first, so use the right protective gear before undertaking any hack or technique. Consult a professional if the engine does not stop smoking after adopting the above steps as engine producing smoke and failure of the engine to start are the signs of fundamental engine problems, which would result in the breakdown of the whole system. 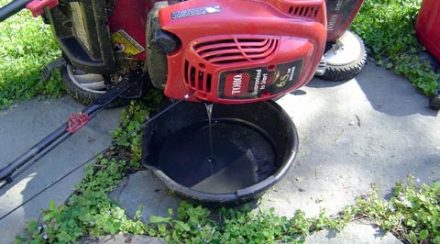 how to drain oil from a lawnmower
Categories: Lawn Mowers 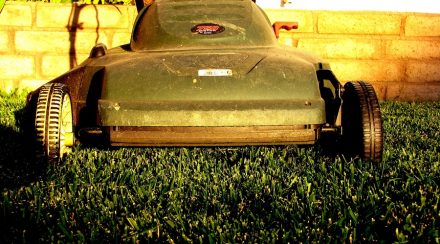 Lawnmower loses power when cutting, what to do
Categories: Lawn Mowers 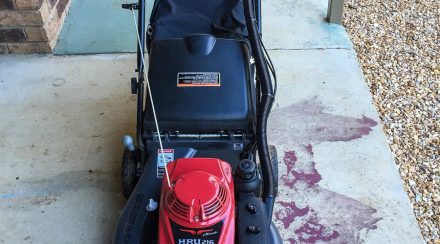 How To Clean A Lawn Mower Carburetor
Categories: Lawn Mowers