Lawnmowers have a reputation for being loud machines but overtime a lawnmower can get louder than usual to the point where it becomes difficult to use it. While we can’t do much about the normal sound of the engine there are some noises such as grinding sounds, squeaking and knocking that are not normal and need to be fixed. Some common reasons why your lawnmower is louder than usual include:

Any unusual sound coming from your lawnmower should be looked into immediately. If your lawnmower is running louder than usual it can also cause permanent damage to your mower and reduce its life if you ignore the noises. That is why we are going to tell you about the causes of why your lawnmower has gotten loud and how you can fix them.

One of the most commonly experienced noises from a lawnmower is a loud rattling sound that is a result of a loose blade assembly. If the blade assembly is loose it will move around during startup and it will keep on rattling as the lawnmower runs. Sometimes the blade itself can be bent or damaged which can cause a lot of noise and it can also put a lot of strain on the drive shaft itself.

You can fix a loud blade assembly yourself by following these steps below:

Step 1 Disconnect the spark plug wire before you tip the lawnmower on its side and also make sure that all power switches are in the off position. This precaution will make sure that the mower doesn’t start up accidentally when you are taking a look at the blade assembly.

Step 2 Tip the mower on its side, get a wrench and see if the bolt holding the blade is tightened up or not. If the bolt feels loose then get a piece of wood to jam the blade in place and turn the bolt clockwise until it is tight.

Note: If your blade assembly is not loose and the bolt is tight but you still hear vibrations and rattling from underneath the deck of the lawnmower then chances are the blade of your lawnmower is the source of the noise. If the blade is out of balance (one side is lighter than the other) you can use a mower blade balancer to balance both sides of the blade or if the blade is severely bent or damaged you might have to replace it.

● Grass and debris buildup under the deck

If you mow wet grass quite often then overtime grass and debris will build up underneath the deck and the blade itself. This leaves little to no room for grass to circulate as most of the space in the deck gets taken over by debris buildup. This grass buildup is also going to deflect the blade as it spins and a clunking sound can be heard from under the deck.

Getting rid of debris from the deck of the mower

Step 1 Unplug the spark plug wire and tip the mower on its side to access the deck. If the user manual of your mower allows you to use water on the deck then use a power washer to loosen up the grass and debris buildup from the deck. In case you can’t use water to remove the debris you can either use a scraping tool to remove built-up grass or you can use compressed air to blow away the debris. Whatever method you use just make sure to get rid of all the debris from the deck and the blade of your mower.

Step 2 After cleaning the debris apply some WD-40 to the deck of the mower to prevent debris from building up again.

Note: Make sure that you don’t apply too much WD-40 because the excess lubricant is going to drip off onto your lawn’s grass.

● Damaged or worn out muffler

A muffler is used to suppress the sound of the engine exhaust and it reduces the noise of the engine significantly. But if the muffler gets damaged or it is not sealed with the engine properly noise will not be suppressed properly and you will hear a lot more noise coming from the engine of your mower. Sometimes the damage to the muffler may be visible in the form of holes or cracks while other times the muffler may not be fitting properly with the engine outlet. Luckily most lawnmowers come with easy to remove mufflers that are relatively cheap to replace and install. You can buy a decent muffler for your lawnmower for between $20 to $40 and replacing a worn-out muffler should reduce the engine noise significantly.

Since lawnmower mufflers are not too expensive it is recommended to replace the muffler instead of trying to fix it because even if you put some kind of sealant on the hole or crack it will come off in no time. Replacing your lawnmower’s muffler is a pretty straight forward task and it can be done in few easy steps.

Step 1 Before you start the muffler replacement process make sure that the engine is not hot. If you had just used the mower it is wise to wait a few hours before replacing the muffler. Wear a pair of work gloves for protection and turn the muffler counterclockwise to make it lose. Keep turning the muffler until it comes off.

Note: Sometimes the muffler may be stuck due to rusting and to unscrew it you will need a pipe wrench to get it unstuck. The majority of lawnmowers can be removed by simply turning them but some mowers have an exhaust pipe with the muffler attached to the end of the pipe. If the exhaust pipe itself is damaged you will have to replace it as well which is a bit difficult compared to removing the muffler and you might need professional help to avoid damaging your mower’s engine.

Step 2 Don’t throw away the damaged muffler just yet because you will need to buy a matching muffler that fits your lawnmower. So take the old muffler to the store to find a similar new muffler to install on your mower.

Step 3 Putting the muffler back on is as simple as taking it off all you have to do is put the threaded end of the muffler into the exhaust outlet of the engine and turn it clockwise until it is nice and tight. With a new muffler installed your lawnmower should run quieter now.

● Not changing the engine oil frequently

While lawnmower engines are small they still require regular oil changes every 30 to 40 hours of use or twice a year. Engine oil lubricates different moving parts of your lawnmower’s engine and overtime heat and friction can burn up the oil and after a certain time, the engine oil loses its ability to properly lubricate the engine. This causes the moving parts within the engine to rub against each other making the lawnmower louder than usual when running and a loud knocking sound can be heard coming from the engine. Luckily some lawnmowers have built-in low engine oil alert which lets you know when to change the engine oil but even if you have a mower that doesn’t have a low engine oil alert, you can easily check and change the engine oil using the method explained below:

Step 1 You will want to warm up the lawnmower’s engine before changing its oil because warm oil flows out easily.

Step 2 Place a pan underneath the oil fill to catch the old oil and tip the mower to its side so that the oil fill cap is pointing downwards with the pan directly under it.

Step 3 Now remove the oil fill cap with the lawnmower tipped to its side and let the oil drain out for a minute or two.

Step 4 Pour fresh engine oil into the mower’s engine and make sure to pour the correct amount of oil into the engine.

With some care and proper maintenance, you can get rid of loud noises that are common in lawnmowers. 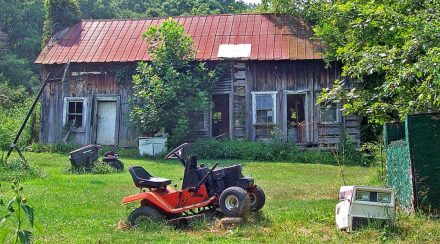 How to Change Blades on a Husqvarna Riding Mower, Step by Step
Categories: Lawn Mowers 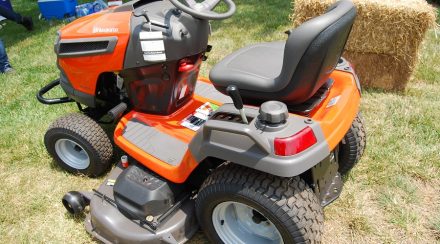 How to Bypass the Safety Switch on my lawnmower, step by step
Categories: Lawn Mowers