In this blog post, I will share the best solution to fix your flooded pressure washer. It will reduce your effort and stress when you make an informed decision.

Scroll on to read the comprehensive step-by-step guide to fix your flooded pressure washer.

There are a number of reasons and causes behind the flooding of your pressure washer. The seven most common reasons are,

The simplest way to detect if your engine is flooded with fuel is to remove its spark plug and check for wetness. If you find your spark plug wet, then you must dry out the cylinder before attempting to restart your pressure washer. Compressed air can help you speed up the process of drying out the cylinder.

Your pressure washer has a two-stroke engine which is a small internal combustion engine. It has a single cylinder and it works with the combination of gasoline and oil. The oil is for the lubrication of the crankshaft and piston while the gasoline provides power to the engine of your pressure washer.

This places such a heavy load on the starter motor that it fails to ignite the engine. Your engine is also at the risk of getting damaged beyond repair because of even dilution of lubricating oil with the fuel and excessive compression. You can also call this situation the engine “flooding out”.

A couple of possibilities that lead to the situation of a lot of fuel flowing into the engine are; a damaged carburetor float which is unable to properly close the fuel inlet needle valve or dust/debris stuck inside the inlet needle valve which prevents it from closing tightly. Fuel found inside an internal combustion engine is very detrimental due to the incompressibility of the fluids. A flooded engine of your pressure washer will cause a hydro lock.

A hydro lock is a situation where the fluid fills the combustion chamber to a point where it is impossible to turn the crankshaft without damaging the engine or its important parts.

How to clear a flooded pressure washer engine?

To fix the flooding in your two-stroke engine you must place the pressure washer on a flat surface. Read the user manual to locate the spark plug because its location may vary from engine to engine. Use a spark plug wrench to rotate it anticlockwise which will loosen it.

After unscrewing, use your hand to take off the spark plug from your engine, make sure your face is away from the place because the fuel may splash out with pressure. You must deactivate the choke of your engine by pushing in the choke control lever. Now you must pull your pressure washer’s starting cord at least 8 times as you depress the throttle control lever fully.

Use a piece of dry cloth to wipe off the excess fuel from the spark plug, now use a spark plug wrench to tighten it back into its hole. Now your pressure washer will get started easily.

The similar traditional remedy for a flooded pressure washer engine is to patiently hold the throttle open in a powerful position while continuously cranking the engine. This allows maximum fresh air to enter the engine. This will flush the rich fuel mixture out of the exhaust.

If the engine of your pressure washer is equipped with an accelerator pump, it will advance the flow of fuel to match the air ingestion under the rapid throttle acceleration. If you try to pump the throttle, it will further worsen the situation by forcing excessive fuel to flow into the engine and flooding it to a dangerous extent. The worst of all results is when the excessive fuel damages your spark plug and makes it necessary for you to replace it before restarting your pressure washer again.

A flooded engine can also occur in extremely cold weather when a running engine has been shut off for a short time before being restarted again.

1. What is the effect of high compression in the engine of my pressure washer?

In the engine of your pressure washer, a piston compresses a large volume of air and fuel mixture into a small space. There is a compression ratio between the maximum piston volume and the minimum compression volume.

2. What is an internal combustion engine?

An internal combustion engine (ICE) is a small engine, found in pressure washers, leaf blowers, hedge trimmers, generators, lawnmowers, and chainsaws. It is an engine where the combustion takes place in the presence of the air which acts as an oxidizer inside the combustion chamber. Inside the engine of your pressure washer, the expansion of high temperature and high-pressure gases apply some force to the engine.

This force is applied typically on the nozzle, motor and the turbine blades of your pressure washer. This is how chemical energy is transformed into mechanical energy. There are three types of internal combustion engines: 2-stroke engine, 4-stroke engine, and 6-stroke engines.

3. What is an upper explosive limit?

The explosive limit is also called a flammability limit. It is a combination of dispersed combustible materials such as dust, air, vaporized fuels, and gases. These materials will burn only in the well defined upper and lower limits which are determined by different experiments. These limits vary by pressure and temperature.

In the gasoline-powered internal combustion engine of your pressure washer, the throttle is used to control its power by regulating the amount of air and fuel entering it. The throttle has a butterfly valve which is controlled by a spring. The most basic carbureted engine like that of your pressure washer features a single small throttle plate with a tiny hole on it to allow some amount of air to get into the engine when it is idle.

The throttle is sometimes open, sometimes closed, or in an intermediate position. The velocity of the air is always crucial in the performance of the carburetor of your pressure washer.

5. When does the vapor lock happen?

Vapor lock is a situation that happens in your pressure washer when the fluid fuel changes its state to gas in its gasoline-powered internal combustion engine. It can result in the loss of power or complete stalling of your pressure washer. It is very hard to start your engine from this condition again.

The fuel in your pressure washer will vapourize after being heated by the engine, due to the local weather or lower boiling points at higher altitudes. In some places around the world, fuels with a lower boiling point are used to improve the engine startup during the cold weather. If you continue to use these specialized fuels in the hot weather a vapor lock will probably happen.

6. What is a starter motor?

A starter motor is also called a cracking motor, a self-starter or simply a starter. It is the part of a pressure washer which is responsible for cranking the internal combustion engine. It helps the engine to initiate its process on its own.

The starter motors can be powered by electricity, hydraulic means or pneumatic means.

A hydro lock stands for a hydrostatic lock. It is the condition of an internal combustion engine that is designed to compress the gas mechanically. A hydro lock occurs when a volume of any fluid greater than the cylinder’s volume enters it.

8. What does autoignition temperature mean?

Autoignition temperature is also called a kindling point. It is the lowest point at which any material ignites without any external ignition such as a spark or a flame. Such a temperature is needed to provide the activation energy for combustion.

There are two different methods to activate the choke valve: i) manually or ii) automatically. i) You can either manually activate it by pulling a lever or a pull handle in the engine of your pressure washer. ii)  An auto choke has a temperature-sensitive device that works on its own.

Inside the engine of your pressure washer, a crankshaft is installed either vertically or horizontally. It is a rotating shaft that converts the reciprocating motion of the piston into rotational motion. It is an integral part of the pressure washer.

It has a series of cranks and crankpins to which the rotating rods are attached.

13. What is the difference between two-stroke and four-stroke engines?

A stroke means the full travel of the piston along the cylinder in either direction.

A two-stroke engine is also called a two-cycle engine. It is a type of internal combustion engine. It completes its process in two strokes which is an upward and downward movement of its piston, while the crankshaft revolves only once.

A four-stroke engine is also called a four-cycle engine. It needs two revolutions of the crankshaft to complete the power cycle with four strokes of its piston. The four strokes are named as:

i) Intake or induction or suction

iii) Combustion or power or ignition,

In order to conclude this blog post, I would say that, if you follow the above given step-by-step guide to fix your flooded pressure washer you will easily solve the problem. 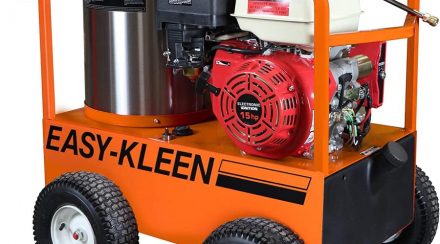 Can you use hot water in your pressure washer?
Categories: Pressure Washers 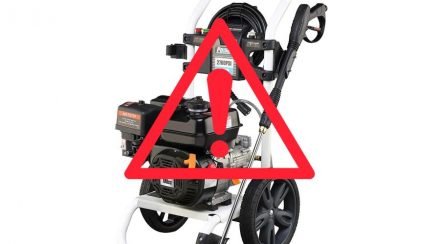 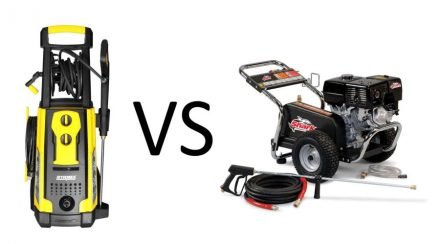