After working smoothly for some time, your mower starts backfiring unexpectedly. Engine backfire can quickly leave the owner or operator in distress because a backfire can be loud and frightening. A backfire is just like a small explosion, it is not dangerous most of the time, but the causes behind a backfire could be hazardous for your engine. If your mower’s engine backfires and you understand why it does so, you can fix the problem and make sure it does not do it again so you can keep using your mower like normal. Backfires happen unexpectedly and mostly catch you off guard while turning off or starting your engine, so it is beneficial to have at least the basic info about engine backfires and how to deal with them.

Why Does My Lawnmower Backfire, and how can I fix it:

Backfires occur when fuel comes close to a spark outside the engine combustion chamber and is either fuel-related or engine related. Sometimes, fuel can escape your engine’s cylinder before the valves close or during the exhaust stroke and enter the engine or exhaust. If a sufficient amount of unspent fuel manages to enter the engine and comes close to the spark, it will ignite, causing a small engine explosion. Combustions of fuel anywhere in the engine other than the combustion chambers or in the exhaust will always produce a bang or backfire.

Engine backfires are caused by basic and simple chemical malfunctions, and solving the backfiring problem is not difficult. It is necessary to fix the issue as soon as possible so that the engine and exhaust are not damaged beyond repair. Information about engine backfiring in lawnmowers presented in this article will surely help you manage a backfiring situation in a better way.

Backfiring and How Small Engines Work:

Backfiring in lawnmower engines can be caused by either fuel-related causes or engine related causes. Both are explained below.

Fuel in the engine’s combustion chamber requires a certain amount of air to burn properly. Just like any burning, fuel combustion requires oxygen. Each engine is designed so that the correct air-fuel mixture is provided to the combustion chamber during operation. All strokes are timed perfectly for the complete combustion of fuel, maximum energy release, and smooth machine operation. If the air-fuel mixture is in an incorrect proportion, it will cause all sorts of problems for the engine. For example, if the fuel is too rich, it could result in your engine blowing smoke.

The timing of all processes in the combustion chamber is vital. A process happening early or getting delayed even by some seconds can cause problems. An incorrectly proportioned air-fuel mixture can cause a timing disruption.

If there is too much air in the combustion chamber, the engine will not create a spark with enough power to ignite the fuel for some seconds. While the ignition is delayed, other combustion chamber processes keep happening in the way they are supposed to be. This causes the fuel to pool in the low spots along with the exhaust. This fuel can then get ignited outside the combustion chamber, producing an explosion that you know by the name of a backfire.

Replace the old fuel filters and get the fuel pump repaired. If low-pressure fuel were the cause behind your mower backfiring, these fixes would solve the problem.

As mentioned above, the timing of all engine processes is very crucial for its smooth function. Engine related issues that mess with the timing can cause backfire.

If your lawnmower is backfiring, check for its motor’s timing. If the motor timing is not right, the engine may ignite the fuel while the intake valves are still open. This can cause a backfire in the engine.

After prolonged use, the timing between the engine and the valve can become disrupted or out of the correct setting. This situation inside the engine results in backfires.

To solve the engine-related causes of backfires, take care of the following things.

Lawnmowers aren’t supposed to backfire when you are starting them. If your lawnmower backfires when you try to start it, it indicates that the mower is damaged somehow.

Many mowers have parts that serve to safeguard other more expensive parts. These inexpensive parts, such as the flywheel, sacrifice themselves to protect the expensive parts such as the crankshaft. If, during mowing, your mower runs over a large rock or its blades hit an obstruction, the flywheel breaks and won’t engage when starting again. This will cause your engine to stutter or backfire as you try to start it.

A mower with a broken flywheel won’t start normally, and so it can’t be used until the flywheel is repaired. If your mower backfires when you try to start it, the indication is of damage. In this case, you must take your mower to a professional for repair.

Sometimes, when you mow, and you turn the engine off, or when your mower is idling, it will backfire. This is most probably happening because you are slowing your engine too fast.

The engine speed builds up during operation, and when you slow it down too quickly, it could pump gas to the mower’s muffler. This gas could ignite there and cause a backfire.

To reduce this kind of backfires, make sure that you gradually reduce speed and let the motor idle for 10 to 15 minutes before turning off the engine.

Sometimes, your mower backfires right after the engine is turned off. Backfiring that occurs after shut-off is caused by problems with the carburetor or muffler.

Get your carburetor checked for incorrect settings and your muffler for wrong construction. Getting these two components adjusted will solve the backfiring after the shut-off issue.

Using the wrong kind of gasoline can also cause after shut-off backfires. Gasoline that has alcohol ignites differently than gas that does not have alcohol. Gas with alcohol can get ignited in the muffler resulting in a backfire. Switching to gas with lower alcohol content or alcohol-less gas could solve the mower’s problem backfiring after shut-off.

Special parts can be installed in some mowers to prevent them from backfiring after shut-off. Such features are called anti-after-fire solenoids. Installing them will let you turn off the mower’s engine at any speed without causing fuel to shoot to the muffler.

Installing anti-after-fire solenoids requires professional help. Take professional service if you want to equip your mower with such equipment.

Engine backfires sound dangerous, especially when they catch you off guard, almost every time there is a backfire. An explosion in the mower sounds crazy, but it is not something to worry too much about. The causes of engine backfires are mentioned in this article. Using this info, you can determine why your mower is backfiring and look for possible fixes. So, the next time your mower backfires, put the acquired knowledge to use and get the issue fixed before it causes permanent damage to your mower. 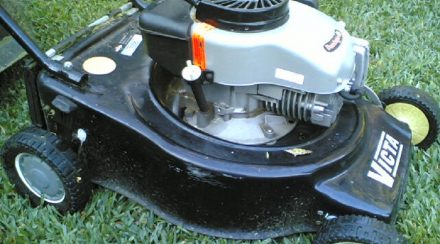 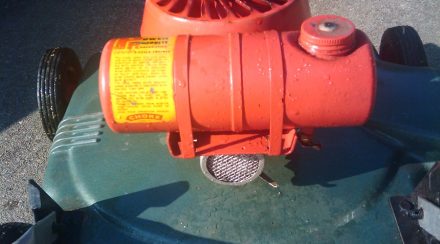 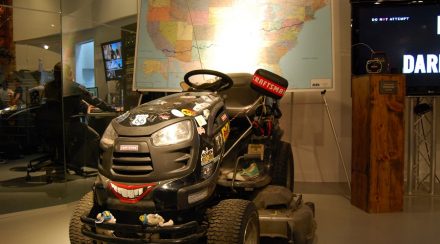