Most gasoline walk behind lawnmowers don’t need batteries in order to start and operate but riding lawnmowers, on the other hand, require a battery to start them up and run different electric powered accessories such as headlights, etc. While lawnmower batteries typically last up to 3 years, if you do not maintain them properly you might end up with a weak or dead battery. So if your riding lawn mower or lawn tractor is having difficulties when starting or doesn’t start at all then there is something wrong with the starting system or the battery charging system and a good place to start troubleshooting is by testing the battery to see if it is functioning well or not. Here is how you can do it.

You can use a device called multimeter in order to test if your lawnmower battery has gone bad or not. Connect the multimeter to the battery and if the multimeter shows a reading of fewer than 12 volts then it is time to replace the battery because a healthy battery should show a reading of 12 volts or more when connected with a multimeter. In addition to using a multimeter, you can tell a battery needs replacement if it has any damage such as cracks, bumps, leaks or broken terminals.

If you have been using the same battery in your lawnmower for more than 3 years then it has already reached the end of its useful lifespan. But if the battery is new and you are experiencing starting issues or if the battery is discharging too quickly then you can test it by following some simple steps explained in this article so keep reading.

There are two ways you can test a lawnmower battery and you can use either one of these methods or a combination of both for testing your lawnmower’s battery. These two battery testing methods are:

You can perform both of these tests when trying to determine if your lawnmower’s battery is the reason behind the starting issues or not.

Testing a lawnmower battery using a multimeter (Step by step)

Step 1. Before you start the testing process you have to locate the battery of your lawnmower. The best way to do this is by checking the user manual of your lawnmower to find out the exact location of the battery. Usually, riding mowers have the battery secured under the seat and in order to access the battery you have to remove the seat. Or another common place where your riding lawnmower’s battery might be located is inside the hood or engine cover of your mower, behind the engine and you can easily access it by opening the hood of your mower.

Step 2. Turn the ignition switch to on position and switch on the lights of your riding lawnmower without starting the engine up. Doing this will get rid of any surface charge that the battery might hold and you will get a more accurate reading just by leaving the lights of the mower on for one minute before connecting the multimeter.

Note: If your lawnmower’s headlight is dim when turned on without starting the engine then it means the battery is already low on charge and you can connect the multimeter without doing this step.

Step 5. As soon as you connect the multimeter wires to the positive and negative terminal of battery the screen of the multimeter will show a reading which is going to tell you whether your battery is in good shape or not. If you have a 12-volt battery and the multimeter shows a reading of 12.6 or in case of a 6-volt battery the reading is 6.6 and above then this shows that you have a healthy battery. But if the voltage is 11 volts or 5 volts then there is an issue with the battery and you need to replace it.

Before doing this test make sure that you have charged the battery sufficiently since a battery that hasn’t been charged or has been sitting for long periods of time will not show a correct reading.

Sometimes simply taking a good hard look at your lawnmower’s battery is going to give you some idea about whether it is still useable or not. Some things you will need to look out for when visually inspecting your lawnmower battery are:

Note: When handling a battery always make sure you have your safety glasses and safety gloves on and if the battery is leaking acid don’t place it on a wooden surface such as a table as it will damage the surface.

The low water level in the battery: Flooded batteries are still used in many lawnmowers and these types of batteries require you to maintain a certain level of water by regularly adding distilled water to them. There is a water level indicator on the side of the battery and if you gently move the battery you can clearly see if the water levels are at the recommended level or not. If the water levels have been low for a long time then it causes an increase in the acid concentration and reduces the ability of the battery to charge itself and hold the charge for normal periods. If you notice that the level of water is lower than normal or worse, the battery is completely dry, then you will have to refill the battery with distilled water and allow it to trickle charge by connecting it with a battery charger for up to 8 hours. If the battery is not charging after adding water and charging then it might be permanently damaged due to being used with low water level and needs to be replaced.

Testing the battery under load: The most effective way to test the health of your lawnmower battery is by testing it under a load to see if the battery is able to maintain its voltage when a load is applied to it. Normally a mechanic will use a battery load tester to apply a load to the battery to see how it performs under load but you can do a simple load test yourself using the headlights of the lawnmower as a load to check the battery’s health. In order to perform this simple visual load test you will need to follow the following steps:

Step 1. Turn the ignition key to “on” position without firing up the engine of the lawnmower to allow the headlights of the mower to be turned on.

Note: It is best to do this test at night to be able to clearly see if the headlights dim significantly or not. You can also ask someone to start the engine of the mower while you stand in front of the mower to make sure that you notice any change in the brightness of the headlights.

Step 2. Now turn the lawnmower’s engine on and notice any change in the brightness of the headlights. It is normal for the headlights to dim momentarily when you start the engine since the starter uses a significant amount of current to start up the engine. But if the headlights dim or completely turn off then it is an indicator that the battery of the lawnmower is weak and it doesn’t have enough current.

Note: If you notice that the lawnmower’s engine is not starting when the headlights are turned on then it is also an indicator that the battery of your mower doesn’t have enough power to handle the load of the headlights and the starter at the same time which is also a sign of a weak battery.

How to charge a lawnmower battery?

It is not uncommon for the lawnmower battery to go dead if the lawnmower hasn’t been used for more than a few weeks but luckily most of the time simply charging a dead battery brings it right back to life. Or if you are going to store your mower for the winter season then it is a good idea to connect the battery to a smart charger which will keep it charged and healthy throughout the winter and prevent it from going bad while it stays unused while the mower is stored. Either way, you will have to charge your lawnmower battery at some point and here is how you can do it the proper way:

Step 5. Now plug the battery charger to the power outlet and the smart charger will confirm that the connection is good and it will automatically start charging the battery. Once the battery is full it will be indicated as full. If you are connecting the battery to the charger for winter storage make sure you leave the battery in a dry place.

How to jump-start a lawnmower battery?

If your lawnmower battery has died far away from any power socket or if the battery charger is not available the best way to get the lawnmower going is by jumpstarting it so that you can ride it back to the shed. In order to jump-start a lawnmower, you will need a car with a fully charged 12-volt battery and jumper cables.

Note: It is important to connect the positive terminals of both batteries first before connecting the negative terminals to avoid causing any damage to the electronic components of the lawnmower and the vehicle.

Step 4. Close the hood of the lawnmower and the car and if you had to remove the seat of your lawnmower to access the battery fasten it in place before riding the mower.

Keep in mind that you can only jump start a 12-volt mower battery because the car battery is always going to be a 12 volt one. So if you have a 6-volt battery in your lawnmower you cannot jump start it and your only option is to connect it to the battery charger in order to charge it. Therefore it is important to make sure your lawnmower has a 12-volt battery and if you are unsure, refer to the user manual of your lawnmower to confirm this. Once you have jump-started the lawnmower, ride it to your garage where you can connect it the battery to a battery charger because a battery that has been dead will require a full charge before it can be used again. 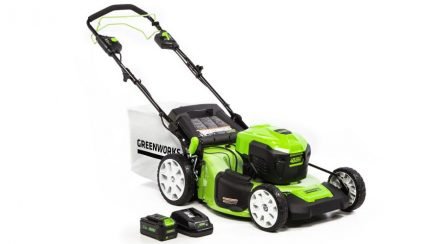 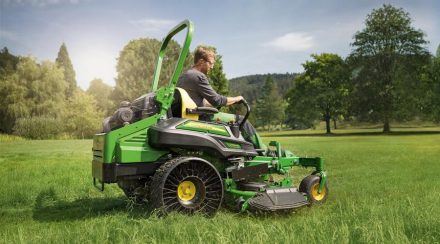 The pros and cons of a zero-turn mower
Categories: Lawn Mowers 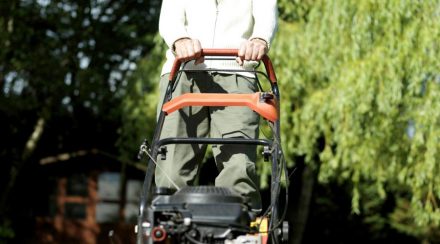