Toro lawnmowers have been around for quite some time and are one of the more popular brands. If you notice that your Toro lawn mower is running slow and not cutting the grass like it used to do, there can be a problem with the belt. If the engine of your Toro Recycler Lawnmower is running, but the blades are not rotating at all, it can also mean that there is a problem with the mowers belt. This blog will help troubleshoot your situation and give a step-by-step solution to change the Toro Recycler belt.

Steps to change the drive belt on a Toro Recycler lawnmower:

Drive belts are situated underneath the mower. Their job is to transmit power from the engine transmission to the lawnmower blades. The blades are attached to an axle that also contains a pulley. The drive belt passes over the pulley. Drive belts are usually made up of rubber with reinforcements of fiberglass, steel. They get worn out quite quickly due to rough operation.

It would help if you stayed tuned to this article. We uncover all the above information and the necessary details that one needs to be aware of.

How to Change the Drive Belt on a Toro Recycler Lawnmower, step by step:

There are two main categories of Toro lawnmowers when it comes to driving belts. That is Front-wheel drive mowers where front wheels drive is driven alongside the blades via a belt and the rear wheel drives in which the belt drives the rear wheels of the lawnmower. We have mentioned the procedure for each of these categories below:

The steps to change a rear wheel belt drive are given below:

Before changing the drive belt, prepare the surface by placing some plastic sheets or cardboard. The lawnmower is to be tilted on that surface. This step is done to avoid the oil spills spoil the floor. It is always better to drain the fuel tank before tilting the mower. Now, tilt the lawnmower so that the air filter points upward. This thing prevents oil and fuel from running into it. Ensure that you disengage the spark plug wire so that it prevents the engine from accidentally starting.

For most models, you need to unscrew the belt cover and baffle. While tilting the lawnmowers, remove the screws holding the baffle and belt cover using a socket wrench.

The belt is situated underneath the blades on the same shaft. Hence, to access the belt pulley, you need to unscrew the nut that secures the engine blades. Now, carefully dislodge the blades while making sure that you use gloves while holding them.

Afterward, you need to remove the traction cable spring on the rear axle with a pair of nose pliers. Now, the transmission bracket is free to rotate.

On the transmission, there is situated a belt guide that secures the pulley. Unscrew the bolts and remove the guide so that the pulley is accessible.

With the pulley being visible, now remove the belt from the pulley. You should purchase the right kind of belt for your model number by going through the owner’s manual.

Reattach the new belt onto the transmission pulley. At the same time, wind the other end of the belt onto the pulley underneath the blade. Place the belt guide back onto the transmission bracket and tighten its screws. Next, connect the traction cable spring back onto its original position. Make sure you fix and assemble everything you removed, such as the mower blades, belt cover, and baffle. With the new belt now installed, it might be a good idea to take your mower for a test run.

The procedure for changing the belt for a front-wheel is almost the same as above. For the sake of information, we shall elaborate on it below.

– Step 1: Preparation of the mower

This step was the same as described above. Just make sure your lawnmower is tilted with the air filter pointing up and the spark plug wire disengaged. If you use an electric lawnmower, you should remove the key from the switch.

Next, you need to remove the components such as the belt cover and baffle, mower blades, traction spring, and belt guide. You should know that various models contain different parts, so you should remove them one by one to access the belt drive.

It is always better to take photographs of the components before disassembly so that it’s easy to know which part goes where when assembling them back.

– Step 3: Removal of the worn-out belt

Replace the old belt with a recently purchased drive belt for your Toro lawnmower model.

Fit all the removed parts back onto their original positions and screw the bolts tightly. Now, turn the lawnmower upside down and take it out for a run. You should check for the effect of the renewed belt drive on the mower speed and cutting accuracy.

1. Why does my belt keep slipping off my lawnmower?

The drive belt can come off your riding lawnmower for various reasons, and the exact reason can depend on the mower’s make and model. Until determining what went wrong and attempting to fix the problem, conduct a safety check. After the engine cools down, wear gloves and goggles, detach the wire or wires from the spark plug, and ground it or them against the engine. When you are working, the engine does not start unintentionally.

Several other mower components repeatedly cause the drive belt to come off. If they are not in working order, drive pulleys and idler pulleys impede proper belt operation. Without obstruction, the movable arm should swing freely, and the blade spindles should move freely as well. Test the rake or pitch of the mower. Slightly forward, a correctly adjusted mower deck tilts, making it 1/8 to 1/4 inch lower in front than in back. Then the belt comes off if the angle is too sharp.

In a riding mower, an accumulation of debris can interfere with regular belt activity. Ensure no grass, soil, sticks, acorns, or other detritus are found along the drive belt anywhere. Not only can debris cause the belt to slip or work poorly, but it can also pose a risk of fire. Clean all debris thoroughly, using a clean brush to wipe the belt.

2. What is a drive belt on a lawnmower?

In lawnmowers, a drive belt is a mechanical instrument that transfers the engine’s power to the transmission shaft, which is then used to perform a lawnmower’s functions that include propelling the machine forward and spinning its blades.

3. What are the two significant types of drive belts used in transmission?

V-belts and synchronous belts are the two commonly used types of designs in transmission applications. The two belts differ from each other based on tooth design and application.

In V-belts, the cross-section is designed with a wedge-shaped profile. They use friction to create a firm grip on the pulley. Synchronous belts incorporate a toothed or notched profile on the belt. They are also known as timely belts and are generally mounted on a sprocket or a toothed gear.

Both types of belts are reinforced with a tensile cord material that carries the load or is known as the belt’s muscle. Materials such as polyester, polyurethane, fiberglass, steel, or Kevlar are generally used in drive belts as tensile cord materials due to their high tensile strength.

Kevlar reinforced belts provide good shock and impact resistance as compared to steel. Moreover, Kevlar possesses a high elastic modulus meaning that its percentage elongation at a specific load is less than other materials. However, belts with Kevlar tensile cords are generally expensive.

The belt drive is one of the vital transmission mechanisms. Thus one needs to be aware of their function so that their eventual replacement can be carried out without much hassle. The lawnmower is often exposed to dusty conditions, and the prolonged operation under rough conditions can deteriorate the belt quality over time. The belt’s replacement is not a tedious job if you have all the mechanical tools and the knowledge at your disposal. You need to disassemble the screws and brackets under your mower until the belt is visible. Also, be sure that you follow the safety procedures and don’t end up accidentally starting your machine. 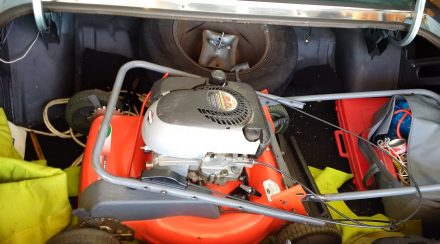 How to clean a lawnmower gas tank?
Categories: Lawn Mowers 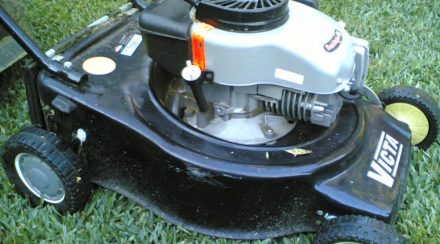 How to Check oil in a Lawnmower, step by step
Categories: Lawn Mowers 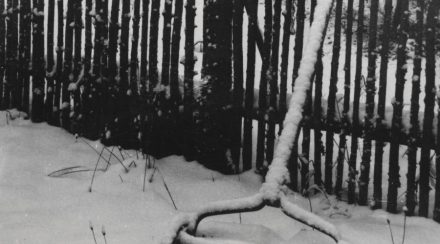 Mowing height for the winter, what height should your lawn have?
Categories: Lawn Mowers